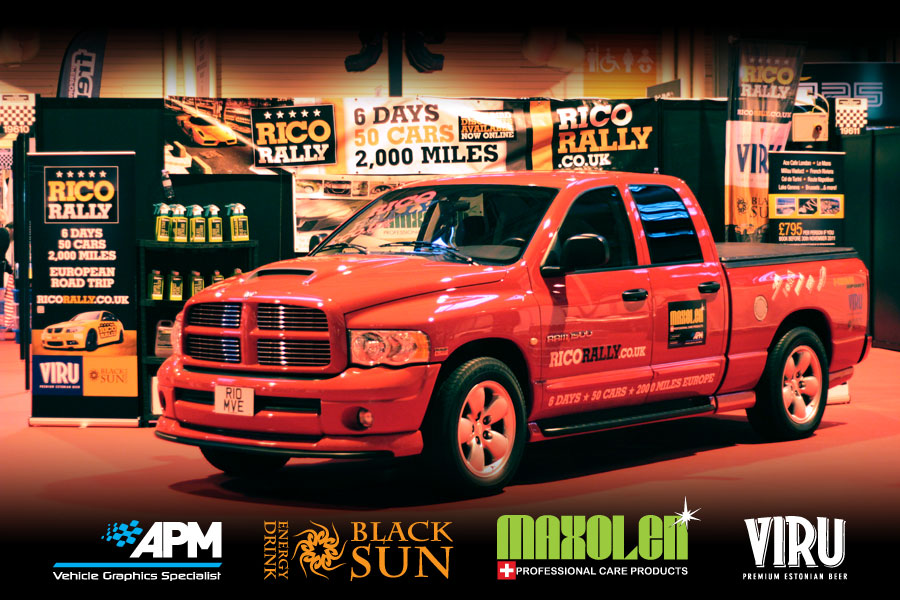 The first two days were trade days and we spent time with 2 of our partners Maxolen and Black Sun Energy Drinks, networking and talking to people about Rico Rally, not only for the upcoming 6 day European roadtrip in June 2012, but also for plans in the future. Several fellow exhibitors are currently in discussions with ourselves to put their vehicles / teams onto the event.

Whilst at the show we met and chatted again with Professional Drift Driver Steve Biagioni from JapSpeed / Maxxis Tyres – we’re trying to get him on the rally but failing that we’re hoping to get him to the launch event at London Motor Museum On June 24th.

Saturday saw another of our partners AutoPro Motorsport visit the show and we met with one of their customers Rob Cowling – Rob’s a driver in the Time Attack Series and was so into Rico Rally that he signed up for our 2012 event that very day!

Throughout the Sunday of the show we kept both public and fellow exhibitors happy with free cans of Black Sun Energy Drink.

We ended the weekend on a total high having met a great bunch of fellow petrolheads who were all enthusiastic about what Rico Rally is doing. This is reflected in the fact that the 2012 rally is nearly sold out. We’ve only a few place left so if you want to sign up do it now – SIGN UP

Thanks also go to Eden Cargo who supported us throughout the Autosport event.