It was a damp and dreary morning in North London. The cars started arriving at Ace Cafe London and it wasn’t long before everyone was tucking into a breakfast butty and checking out the ‘competition’ with a fresh coffee in hand. That was apart from Kev & Vicky from AutoPro Motorsport who supplied the vehicle graphics for the event and were roped into some last minute installations on a few of the cars.

At 10am the roar of all the engines starting signalled the start of Rico Rally 2012, with a tasty burnout from Jake Archer’s Nissan 200SX leaving a reminder on the tarmac that Rico Rally were there.

Day 1 of 6 saw the cars head to Dover to catch the ferry across the channel. Once we were all into France it was a blast through the rain to Le Mans for a much needed rest. The only casualty on the way was the Alfa Spider that suffered electrical gremlins on the ferry and was delayed, but got to Le Mans in the end.

There was a leisurely start the following morning as we kicked things off visiting the Le Mans Museum. With so much motorsport history on display it was hard to take it all in.

It wasn’t long before we were back in our cars and setting off south to Montpellier, with a stop at Millau Bridge on the way. The weather continued to be dreary for the next four hours, but everyone just got on with the drive and had a laugh on the motorways. Eventually after about 4 hours the sun shone its face and this was celebrated by donuts on a garage forecourt by the Nissan 200SX

[you might be noticing a pattern here], much to the delight of everyone except the garage staff who were reaching for fire extinguishers.

After a stop at the Millau Bridge viewing area for some ‘tourist photos’ we set off in convoy for photos and video across the bridge, and then powered the last 100 miles to our hotel. The swimming pool at the hotel was a sight for sore eyes and it wasn’t long before most people were in it, followed shortly by a cool beer and a few glasses of wine.

After a night in Montpellier for food and a few more beers it was a shock to the system for most making an early start on day 3 – there was a lot to do this day. Most people set off with the best intentions before getting lost in the rush hour traffic. Once out of the traffic we hit the motorway for a few hours before heading south on a fantastic winding pass towards St Tropez. Various groups did different things from then on but all of us took in the delights of Cannes & Monaco.

The day was so packed that most people never got to sample the delights of the Col de Turini, though the group of Porsches accompanied by the Lambo [from Strasse, Leeds] managed to slot this into their day. We’ll have to go back with Rico Rally in a few years to do this again with everyone.  Watch their video here.

Our hotel was in Eze, high above Cannes and Monaco, and once again the hotel pool took a battering as everyone chilled and chatted before heading back down into Monaco for the evening. Now the evening traffic had cleared the opportunity was there to drive laps of the Monaco GP circuit and gawp at the motors and money in Casino Square, of and the yachts in the port. As Rico Rally hit the streets it was a bit of a ‘Wacky Races’ visual treat that most people in Monaco were in awe of… a matte black BMW 7 series with huge purple rims and an exhaust that could kill, a Dodge Ram, 200SX with glow in the dark wheels, Sierra Cosworth, Porsche Boxster ‘GT kitted’, bright yellow Supra [loud on colour and noise] and well a group of cars that would’t usually be seen driving together, let alone in Monaco. What a way to finish the day!

It was another early start on day 4, well for some people anyway. Today was a tale of two routes. Option 1 was Route Napoleon and Route 2 was off to Genoa then up through Switzerland. Both ending up at Mulhouse. Everyone had a tale to tell from this day.

The local nutter in his Audi R8 overtaking everything on blind bends; the Aston Vantage V12 being driven how it should, with balls and on full chat; the Landrover Defender in the serene setting of the Swiss lakes. A group of us took a 3 hour detour to go swimming in Lake Geneva at 9pm and then Rico himself having a blowout at around 1am on the way to Mulhouse. It’s fair to say that’s a day most people won’t forget.

The morning after was a later start as we were visiting Mulhouse Motor Museum. As everyone made their way to the cars to pack up a hosepipe was spotted, and then another. Before you knew it a frantic car cleaning session began, making full use of the Maxolen Road Trip Kits that had been provided to everyone. First to roll out on the streets of Mulhouse, glistening in the sun, were the Porsches and Lambo, the sound of their exhausts ricocheting off the tight streets. They were shortly followed by the whole troop of cars for the 10 minute drive to the museum – just check the photos to see the variety of vehicles on the trip.

After a couple of hours at Mulhouse Motor Museum taking in the huge variety of vehicles on display, the cars set off for Brussels. Some took the fast route hitting the motorway, whilst other took the more entertaining route through the national parks just north of Mulhouse. The roads were winding and the scenery simply stunning. It was a fantastic couple of hours driving through the tall trees along roads that seemed to be built for driving. A couple of motorbikes has a close call as they squeezed between 2 lorries on a 180 degree bend but they just about go away with it.

Once we hit Brussels the hotel was ready for us with a fridge full of chilled Viru Beer that was free all night, along with the excellent food we provided for everyone. As the evening wore on a few awards were given out after the past 5 days action;

After several burnouts throughout the trip, including one in the basement carpark of the hotel in Brussels, Jake won this award – a stash of T-Shirts from Fat Punk Studio.

We had 2 signed prints from the acclaimed motorsport artist Ian Cook aka PopBangColour and these were awarded to Lee for the fact that his Sierra Cosworth had actually made it to Brussels, and then to Mary for her ‘out of the blue’ appearance of the Aston Martin Vanquish V12 on Route Napoleon where she proceeded to annihilate everything in front of her before disappearing into the distance, only to be seen again in Brussels hours later.

This was pure irony really as Kenny became known as ‘Super SatNav Kenny’ due to his factory SatNav leading him astray more than once. Kenny won a voucher from Chorley Car Audio that could be put towards… yes you guessed it, a new SatNav!

Spirit of the Rally – Gary and Charlie Hackett

Gary and Charlie spent the week in a Landrover Defender; maybe not the obvious choice for the rally but a canny one. Everyday they played with various groups on the trip, enjoyed the sights, drove all the roads and somehow managed to arrive at the front of the pack everyday. We still don’t know how they did it but big congratulations for encapsulating what the whole event was about. Their award was a DAB Radio with iPod dock supplied by Aqord.

After the awards there were a few more bottles of Viru sunk and the party lasted into the early hours.

With sore heads the cars rolled out of Brussels in the morning, with most people stopping off at the hypermarket before driving to Dunkirk for the ferry home. Once on the ferry there was a lot of comparing stories, checking each others videos and photos, and quite a lot a contacts being swapped so everyone could stay in touch.

If you want to join us in 2013 for more of the same then check out the trip here and get signed up. We’re booking up fast already so don’t leave it until it’s too late. 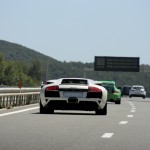